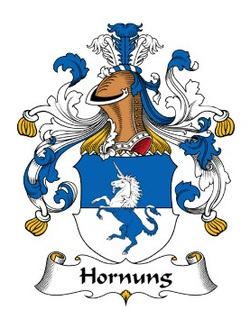 This is a genealogy site dedicated to my ancestors who originated in the small village of Muggensturm, in the District of Rastatt, in the State of Baden-Wurtemburg, Germany. Two major lines also had significant lineage in the Baltic States of Estonia and Latvia (Baltic Germans).
As I have found no ancestors with the Hornung name that are nobility, I have no idea where the coat-of-arms shown applies.  It just looks cool.
The Hornung name has an origin in the calendar names of Charlemagne.  It is the name for the month of February and relates to the time period in which the deer throw their horns.  Much better than the other origin meaning  "bastard".

The data files are stored and maintained on the free webspace provided by my ISP.  I found it easier to do this than try to figure out how to get them here. 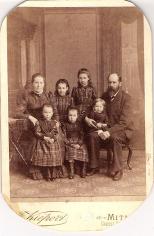 I was fairly stuck at about 6 generations until I worked through the records located at FamilySearch.com and entered almost all Hornungs from Muggensturm that I came across, into a database using Family TreeMaker 2010.  The breakthrough came with the connecting of Maria Elizabetha Hornung, whom I knew to be the wife of my 4th great grandfather, Joseph (aka. Josephi, Josepho) Hornung.  This opened up a whole new lineage.  I'm still stuck on that paternal line, but I still have many more Hornungs to enter.